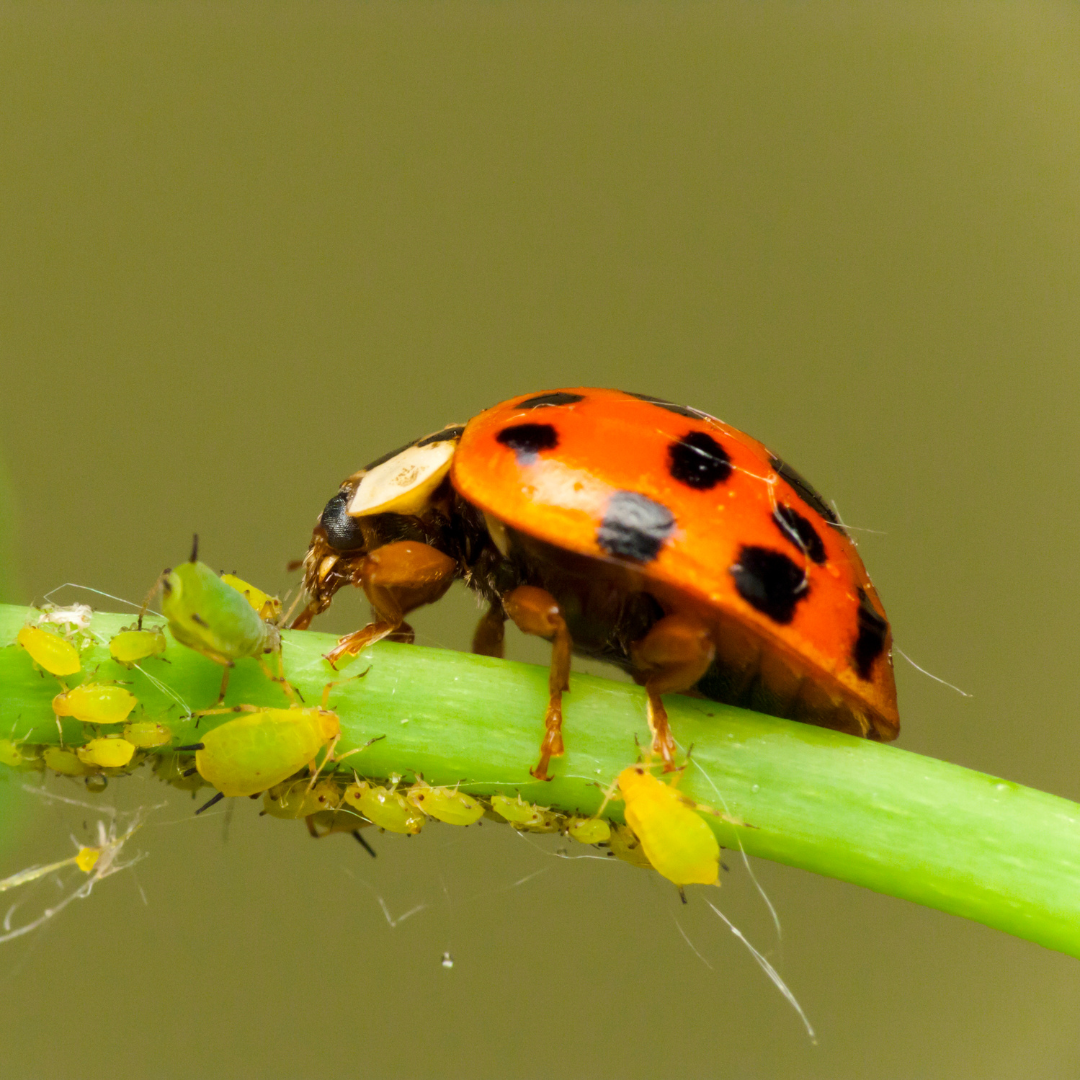 For anyone looking for natural alternatives to using insecticides, bugs that eat aphids are an absolute gift! This article discusses some of the best little pest control agents in the insect world.

Aphids are insects that feed on sap, draining plants of nutrients and introducing their toxic saliva. This causes damage in the form of curling and yellowing of leaves, stunted growth, and general loss of robustness of their host plants. On top of this, these tiny bugs also leave behind honeydew, a residue that encourages mold growth. Of course, this, in turn, also harms plants

Perhaps most importantly, these pests are also one of the major vectors for plant viruses, including among vegetables such as tomato, lettuce, squash, and many other food crops. As they occur in huge colonies and reproduce rapidly, the destruction they cause is often significant.

It’s no wonder, then, that aphids are the bane of every farmer’s, horticulturalist’s, and casual gardener’s existence! While using insecticide spray is probably the most common way to treat infestations, this can sometimes be challenging due to logistical, economical, and environmental concerns.

Fortunately, nature also has its own form of pest control: other insects! Ecologically sound, all-natural, and (mostly) free, bugs that eat aphids can be amazing alternatives or complements to chemical insecticides.

Here are a few examples of these highly beneficial creatures:

Also known as ladybeetles and ladybirds, ladybugs are perhaps the most easily recognizable out of all the bugs that eat aphids, with their signature black spots and round red, yellow, or orange bodies.

Ladybug larvae are voracious aphid-eaters, consuming up to 40 aphids a day, along with other pests such as mites. These alligator-lookalike larvae are practically insatiable and have been known to consume other insect eggs—including their own—in a feeding frenzy.

As adults, they continue to feed on aphids, consuming well over 5,000 insects on average in their lifetime.

Because of this appetite for aphids, ladybugs are commonly sold in bulk by plant nurseries as natural pest control.

As the name suggests, green lacewings have gauzy, viridescent wings that give them an almost ethereal quality. Despite this delicate appearance, they are capable predators, like other bugs that eat aphids.

While as adults, some species of adult green lacewings may only feed on the honeydew left behind by aphids, most (if not all) of their larvae prey on the soft-bodied insects.

Often called aphidlions, these brown and white larvae are armed with large mandibles that they use to attack their aphid prey. They then puncture the insects’ soft abdomens and suck out the body fluids with their prominent mouthparts.

Like ladybugs, green lacewing eggs are available commercially in some areas in North America. One advantage to using these Chrysopidae is that they remain wingless for much of their lives, forcing them to remain where they are hatched.

The goldenrod soldier beetle is often mistaken for less-beneficial insects such as blister beetles when the truth is that it is one of the helpful bugs that eat aphids.

As its name suggests, this beetle often inhabits goldenrod bushes, but can also be found among roses and other flowers. It is also known as the Pennsylvania leatherwing, owing this other name from its soft, burnished-brown elytra.

Both its larva and adult forms are carnivorous, feeding on aphids, insect eggs, and other soft-bodied prey. Adult goldenrod soldier beetles will also prey on bigger creatures such as caterpillars.

While midges are perhaps most familiar to us because of the annoying, itchy bites they tend to impart, the aphid midge is commonly found in a wide variety of commercial settings, from fields of cole crops and potatoes to greenhouses and ornamental gardens. This undoubtedly makes it one of the most beneficial bugs that eat aphids.

These predacious midges are incredibly efficient at locating entire colonies to target, as aphids are essential to their survival. Female adults need honeydew to reproduce, and larvae must feed on the insects to complete a life cycle.

Midge larvae feed by attacking aphids’ leg joints. This paralyzes the soft-bodied insects, allowing the maggot-like larvae to suck them dry through the lesions.

These long, slender insects get their interesting moniker from the distinct position of their front legs, almost as if they are poised to curtsy. This ” pose” makes it easy to confuse the damsel bug with other bugs that eat aphids, particularly mantises and assassin bugs.

Damsel bugs are equipped with long, concealed beaks to pierce their prey and extract body fluid to feed on. Apart from aphids, they also eat small caterpillars, beetle larvae, and insect eggs.

These predaceous insects can be incredibly beneficial for commercial farmers, as they commonly inhabit cotton and soybean plantations, orchards, and strawberry fields. However, it must also be considered that they have been observed to eat other beneficial insects.

Hoverflies are also known as flowerflies, with both common names inspired by how these insects linger among blooms. Along with this behavior, their black and yellow stripes make it easy to misidentify them as bumblebees instead of bugs that eat aphids.

Adult hoverflies are not predaceous, mainly subsisting on nectar and pollen. However, they do lay their eggs near aphid colonies for a reason.

Their maggot-like larvae prey on soft-bodied arthropods, consuming as many as 400 aphids each during this stage in their development. Because of this incredible appetite, a single hoverfly larvae colony can wipe out an entire aphid population.

This family of insects is extremely diverse. There are over 3,000 identified species worldwide. All species bear the same lethal weapon: a sharp, curved proboscis.

This blade-like mouthpart makes the assassin bug such a capable predator. It uses this to catch aphids and insects such as flies and caterpillars, spearing these prey and delivering a paralyzing toxin. Once the prey is rendered helpless, the assassin bug then sucks out its feast of body fluids.

Being a bug that eats aphids, the assassin bug can be considered an asset to farmers and gardeners. However, caution must be exercised. Not only does their diet include beneficial insects such as honeybees and ladybugs in addition to aphids, but these aggressive predators also impart intensely painful bites to humans when agitated.

This insect’s name may call divine images to mind—in fact; it derives its name from the Greek word for “prophet.”

Name aside, though, the mantis is one of the most voracious predators in the insect world, using its signature forelegs to catch and hold its prey in a death grip.

Not only are they counted among the bugs that eat aphids, but they also devour almost anything that crosses their paths. Praying mantises are generalist predators. Yes, they’ll definitely make a significant dent in any aphid population, but this might also come at the cost of other beneficial creatures. On occasion, praying mantises have been spotted devouring much bigger prey such as snakes, lizards, and even small birds and mammals.

Bugs That Eat Aphids – In Conclusion

By no means is this a complete rundown of all the existing bugs that eat aphids out there, but hopefully, it can serve as a great start for anyone interested in natural pest control. 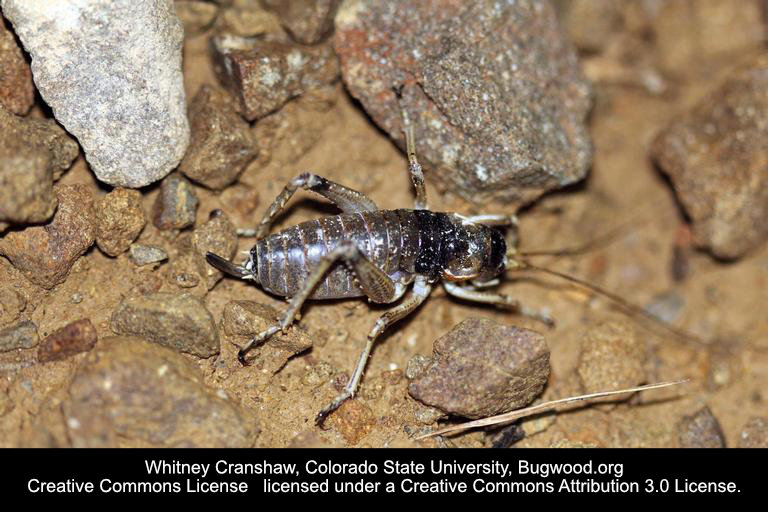 What is the Ugliest Bug in The World? 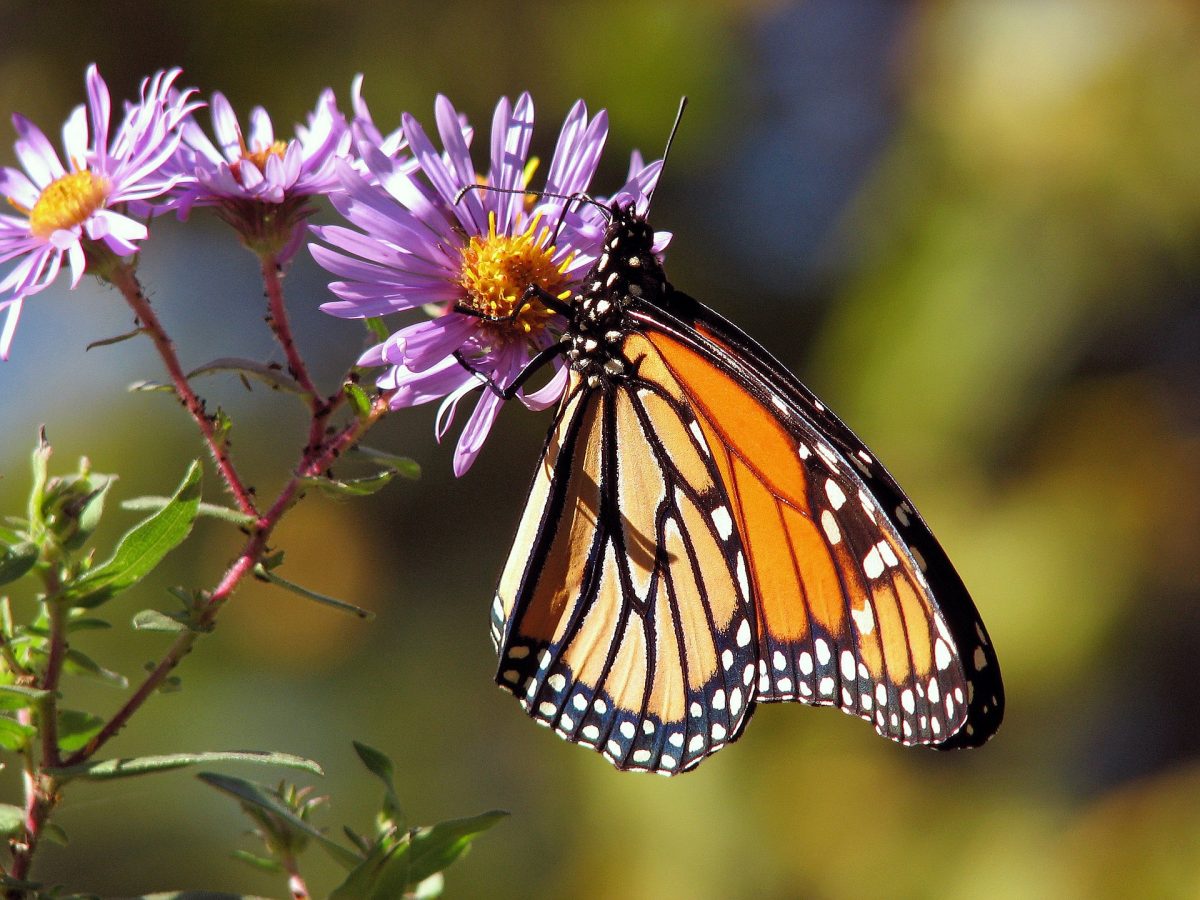 Insect Defense Mechanisms: How Do Insects Protect Themselves from Predators 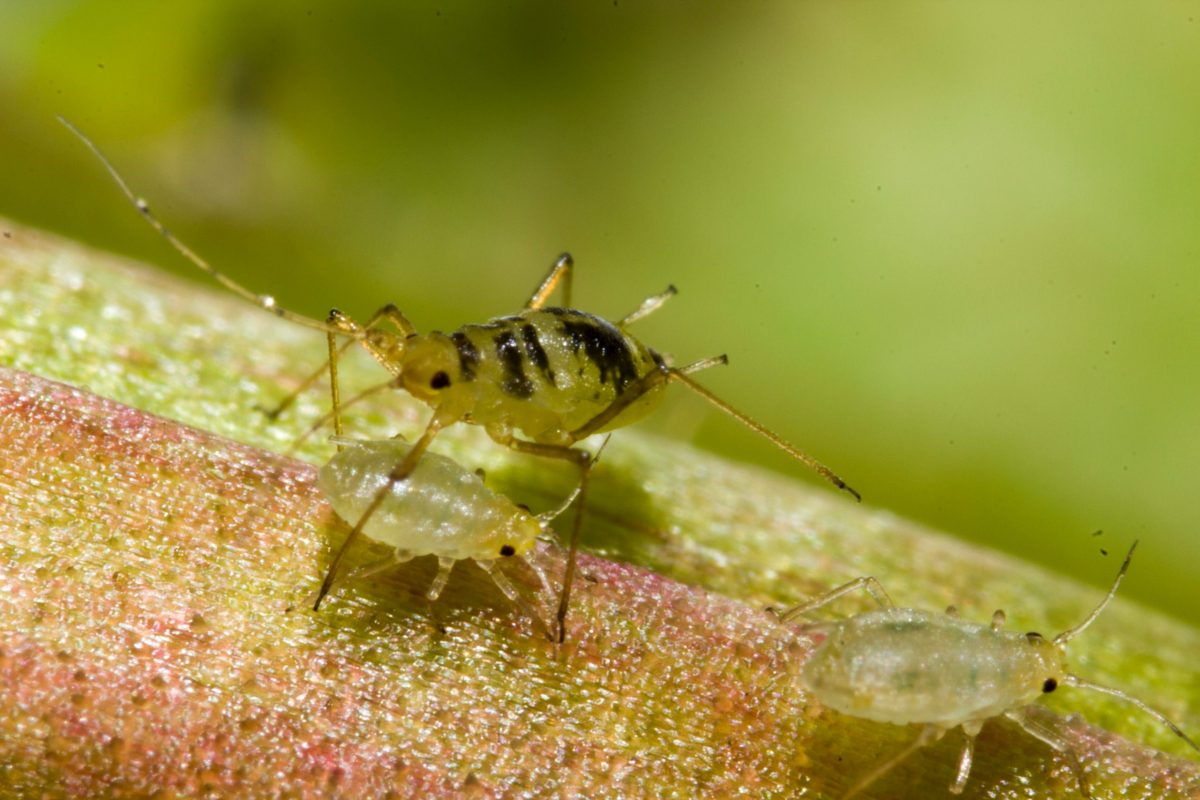