This post may contain affiliate links. I may earn a small commission from qualifying purchases. Please see our full disclaimer. 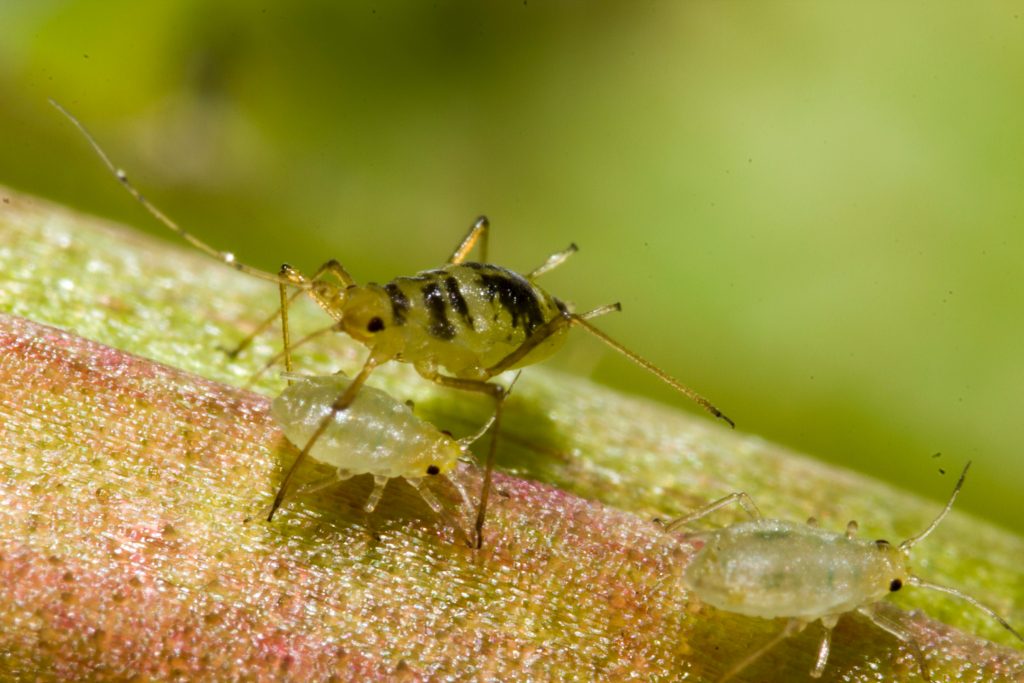 Traditionally used as a form of alternative medicine, the neem tree is known for treating multiple conditions, even before written records became available.

In the same breath, a derivative of the neem tree—neem oil—has found its way into many households as a pesticide for several insects and bugs.

The sulfuric-smelling oil is not only effective against cockroaches. Many claims hold that it can be used agriculturally to decimate aphids.

Is there a basis for such a claim? Are there any studies or research available to substantiate neem oil’s presumed effectiveness against plant lice (another name for aphids)?

Whatever doubts you have about using neem oil in your garden to fight against the formidable aphid, this article will lay them to rest.

Let’s answer the question of ‘does neem oil kill aphids?’

As someone who delights in digging in the dirt of my tiny garden, I can confirm that neem oil works (and in more ways than one).

In fact, it’s a safe option to use, as it won’t chase away beneficial insects that are necessary to keep certain pests under control in your garden.

But, while neem oil has worked in my case, don’t just take my word for it. Let’s consider a few conducted observations to see what research was collected.

You’ve probably come to realize that aphids boast different colors, sizes, and forms—winged and wingless. They also have different host preferences or plants they prefer to feed on, albeit adaptable.

In this study, neem oil was pitched against Aphis glycines or the soybean aphid. Nymphal mortality or death rate of 77% was seen with neem seed oil use. The oil, however, did not affect the soybean aphid’s ability to reproduce (fecundity).

Does neem oil kill aphids according to this study? Yes. Let’s consider another.

In this study, a variety of insecticides were tested against the mustard and turnip aphid. However, we’re merely concerned about the results derived from using neem oil.

Neem oil was tested at various concentrations, with 2.0% as the highest, and 0.5 and 1.0%. Dipping or spraying of aphids on leaf discs was used to test the potency of the oil.

Spraying aphids at 2.0% concentration showed the greatest success, with a mortality rate of 90%.

What does this finding reveal? Using neem oil in a concoction of water, as it’s typically used today, will kill aphids on plant leaves.

Neem Oil and Honeydew Production in Aphids and Repellency

In this study, 3 neem-based products were tested against the green peach aphid. After feeding aphids with flora that has been treated using neem insecticides, it was noted that the rate at which they created honeydew plummeted to around 14 to 40%.

This could indicate that neem oil prevents aphids from feeding on foliage. As aphids are major carriers of many plant vectors, using neem oil could result in fewer plant viruses, since aphids primarily spread vectors to plants through feeding.

One of the neem-based insecticides—Azatrol—was more potent when applied to the roots as a systematic treatment, as it showed a 50% decrease in aphid feeding activity.

All in all, a 50-70% reduction was seen a week after the products were sprayed on the leaves, while pure neem oil and Azatrol almost showed total elimination of aphids, seven days after using the first spray.

Although neem oil did reduce the aphid population, it wasn’t a good repellent when used at typical concentrations. In some cases, higher concentrations provide more favorable results than those typically used.

How Does Neem Oil Kill Aphids?

According to the three observations mentioned, there’s no doubt that neem oil kills and deters aphids from feeding on plant foliage. But how does it work?

Neem oil particularly kills aphids through smothering. When sprayed directly onto aphids, the oil causes suffocation; whereas, the active compound azadirachtin is what deters aphids from feeding on plant leaves.

Using neem oil within your garden to fight against aphids is not only effective but safe. It’s an easy horticulture oil to acquire and can even be bought online through Amazon.

For another simple hack to kill aphids, I’d suggest reading this detailed article.

Please log in again. The login page will open in a new tab. After logging in you can close it and return to this page.